A comic novel inspired by reggae music. In 1936, His Imperial Majesty Haile Selassie, Emperor of Ethiopia, finds refuge in England after the Italian invasion of his country.


In the hills of Jamaica in the late thirties, groups of dropouts find references in Revelations of the Bible that lead them to believe that this Emperor, also known as Ras Tafari, is the second coming. They develop a way of life and belief that revolutionises Jamaican culture and music, using African drumming and chanting. In the fifties and sixties, Jamaican migrants bring this music with them to England, creating in the process a new identity for successive generations of black, white, Asian and mixed race Britons. In West London in the late nineties, young reggae fan Robbie Morgan walks into his favourite record shop and buys a record. 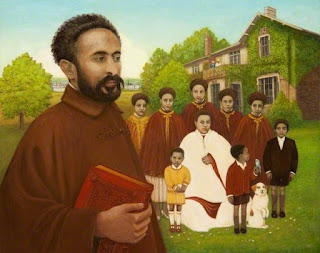 Available to buy in paperback from Lulu or kindle on Amazon
Free PDF version for a limited time https://drive.google.com/file/d/0BxWp7AD4LPTtdVdTX01lS0ZOdW8/view?usp=sharing